On Writers and Rhino Skin

“Any writer who can be discouraged, should be.”—Harlan Coben 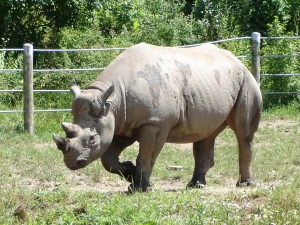 As a little girl, I excelled in school. Even before I was old enough to earn A’s, I received E’s (for “Excellent.”)

But there was one area in which I didn’t excel. Look at my second-grade class picture, and you’ll find me on the front row: cat’s-eye glasses, red cheeks, and clasped hands.

I donned my first pair of glasses earlier that school year. But the red cheeks and clasped hands? Those appeared a few minutes before the photo shoot, when two of my classmates told me I pressed too hard when I colored.

The problem (and subsequent sobs) came not because I thought I was a great artist, but because I wanted to do everything right. Hence the tears and red cheeks. Hence the soggy tissue stuffed between those clasped hands. Hence the consistent report- card comments: “Does not receive criticism well.” “Needs to work on responses to criticism.”

My teachers could well have said, “Needs to develop rhino skin.” These ponderous mammals have skin more than ten times as thick as the human epidermis. We’re talking tough!

So yes, I needed to develop thicker skin. I needed to understand that not everyone would like what I drew (or wrote). And I needed to gain the strength to persevere no matter what.

Today, I believe that my tender heart is a God-given quality, part of what makes me a good writer and intercessor. But if I’m not careful, my sensitivity can also drag me down, leaving me stunned and silent after a negative review or trembling after a harsh conference critique. And, if I’m not careful, it can block my desire to improve my work.

At the Colorado Christian Writers Conference, in a special Early Bird workshop on Wednesday, May 13 at 1:00 p.m., I’ll teach about “Rhino Skin: Why We Need It and How to Get It.” I’ll share how I moved from the tearful second-grader to the writer who has no more fear in giving or receiving critiques of her own. And I’ll teach how you can grow that tougher skin, too.

P.S. If you missed my tongue-in-cheek poem about Sam-I-Am and the CCWC, check it out here. Enjoy!