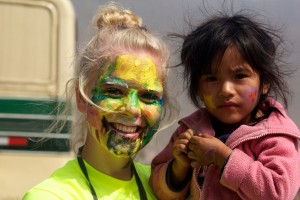 Grace. We don’t always understand it, but we all need it. We Christ-followers often use the word more casually than it deserves. Grace comes from our Father. It enriches our lives. It makes the impossible possible, the unforgiveable forgiven. And its presence and power serve to remind us of His.

Perhaps the parents of one of the students I met this summer on our Never the Same missions trip had some of these things in mind when they named their daughter. I know the Father sent her, and I know her presence reminded me of His.

I may have met this young woman during our training in Florida, but my first real memories of her come from our first day on the mission field in Lima. The team I traveled with that day had an assignment in one of the poorest communities I’ve ever seen. Ramshackle houses—some of pressed board, some of tin—covered the hillsides. No home had electricity or running water. Dust blanketed the graveled streets, the houses, even the people.

Before we left our bus, the team leader explained the plans for the day. As a way of serving the people, some team members would knock on doors and ask if anyone wanted their hair washed. Others would prayerwalk the community, seeking those who would share their needs and receive prayer. Still others would remain on the nearby soccer field and play with the children who inevitably appear at the first hint of a game. After lunch, the team would perform the Spellbound drama used to present the gospel. But other ministry came first.

I know that one of the rules of missionary work is to engage the culture. As an introvert, I have to relearn this lesson often. Talking to strangers, especially when they don’t speak my language, is a challenge for me. So this past summer, the Lord sent me a teacher, whose name—by no coincidence—was Grace.

Ever the observer, I waited with my writer’s notebook and watched different groups. Slowly, the Lord allowed me to speak a word here and pray a prayer there. My job was to tell the story of the trip, but I was more faithful with my note-taking than my people-engaging. And then God gave me the opportunity to watch Grace, who took just the opposite approach.

Grace didn’t wait for people to respond to her. Instead, her enthusiasm and love drew people her way. On the soccer field, she raced, kicked, blocked, and laughed—a trail of children soon following behind. In conversations, I never saw her wait for a translator. She said what she could with her words. But her hugs, genuine smiles, and willingness to interact communicated far more.

Like many of the students, Grace brought face paint along to aid in the drama performance. But she also shared it with the children. Before long, they had coated her nose, cheeks, even her eyelashes in the thick, brightly-colored goo.  She laughed right along with the little makeup artists, whose often-wary mothers couldn’t help but see the warmth of her love. Later in the morning, I’m sure that many who watched the drama came because Grace (and grace) helped prepare the way.

That day, the tall, blonde American—who had never before taken a mission trip—taught the veteran missionary much about how to show the love of Christ. You might say she showed me grace in action. And I’m grateful.

Have you traveled on a Never the Same trip? Feel free to share your (positive, please) comments below. And if you’re interested in joining us this summer in Costa Rica, you can find out more information here. Watch for more Never the Same posts coming soon!

Grace Harken was tragically killed on July 29, 2015 when a car struck the bicycle she was riding home from work. I am confident she is spreading joy and grace in heaven, just as she did on earth. See you soon, my sister. See you soon.