WRITE: Here I Am, Send Me? Courage in Costa Rica (Never the Same Missions, Part 2)

The other day, I posted Part I of an article that, because of the cessation of Sisterhood Magazine, never hit print. Since I still want others to read the great things God did through the Never the Same missions team in Costa Rica, I’m posting the story in installments on my blog. Enjoy the stories of two more courageous missionaries in Part II of “Here I Am: Send Me? Courage in Costa Rica.” 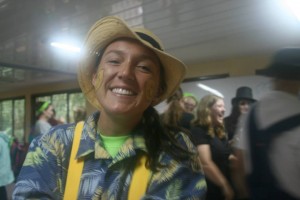 Kohlie also traveled to Costa Rica, but on a free ride. Her winning entry in Sisterhood’s Faith in the Wait contest covered the cost.

Not only was this her first missions trip, but the journey from home to Florida was also her first flight. “My mom and dad were nervous,” she confessed during training. “But I want to be the hands and feet of Jesus, I’m excited to learn about the culture—and I want to be brave in my faith and stepping out.”

As the trip progressed, God brought opportunities to do just that. “Lord, use me today,” Kohlie prayed one morning. Never the Same teams use a pantomime drama, “Spellbound” to share the gospel. Her team performed that day on a dirt road in one of San Jose’s poorest areas. Afterwards, “I turned around and saw a little girl who looked dead,” Kohlie explains. “Her friend was carrying her like a rag doll. I didn’t know what to do.”

But Kohlie remembered her prayer. “I went over to check on her, then ran to get Chris,” she says. The medical clinic, a new ministry on this year’s trip, was operating alongside Kohlie’s team that day. Two doctors, several nurses, other medical professionals and students took turns meeting basic health care needs. When Kohlie called, Chris, a pediatric nurse practitioner, went into instant action.

“The little girl really did look dead,” Chris explains. “But when I checked her, I realized she had passed out from dehydration and lack of food. We gave her some water, and soon, she was running around again.”

Since the team also operated a feeding station alongside the clinic, this little girl and many of her neighbors received a full lunch. “It broke my heart,” says Kohlie. “I realized how selfish I can be when I don’t get what I want at a restaurant, and here’s a little girl who doesn’t have enough to eat and drink.” For this first-time missionary, Faith in the Wait meant courage to care.

John’s Costa Rica courage also began with a morning prayer. “I asked for the language barrier not to be an issue,” he says. A short time later, his team arrived at its first ministry site, a park.

Many of the teens learned the craft of ballooning from adult leader and “balloonatic” Rex Hanson. “A homeless man asked us for a balloon, then went and sat down,” remembers John. “God was saying, ‘Go talk to him.’”

After some inner hesitation, he obeyed. To his surprise, “The man could speak a little English. And as we kept talking, his English got better and better. I found out his best friend had committed suicide only three days before.”

John saw the need and shared the gospel without a translator. The man received salvation even before the drama performance, John’s first experience ever in leading someone to Christ.

Later, the man let John know he had planned to follow his friend’s destructive path. “If it weren’t for you, I would have died tomorrow.”

For the rest of the trip, John kept sharing Christ, and people kept coming to know Him. Do you believe God can break the language barrier? He can also give you courage to share.

Have you served God in international missions, or would you like to? I’d love to receive your questions and comments below, on social media, or through the email link at the top of this page. Tom and I hope to join Never the Same in Ecuador June 29-July 12, 2015. Maybe you, like the prophet Isaiah and like Kohlie and John, will say, “Here am I. Send me!”