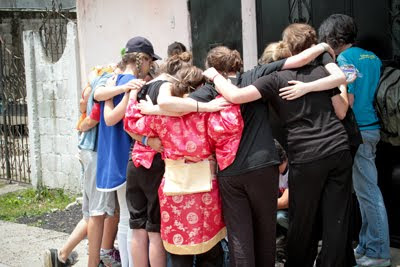 I’ve now taken my longest break from my blog since its inception earlier this year. My two-plus weeks of training and serving with the SUSIE Magazine missions trip to Guatemala were exciting, exhilarating, and exhausting. Blog- and writing-time both suffered during trip preparation, execution, and recovery.

Back home, I’m busy writing the trip’s story for SUSIE’s November issue. The article (plus additional online content) will continue in one-page features over the next several months. I’ll also write some short pieces about students who sponsor Guatemalan children through Compassion International and had the opportunity to meet them one delightful, incredible afternoon. That day, I gained new respect for the ministry of Compassion—and for the sacrifices made by the students, too.

The beautiful people of Guatemala now hold a special place in my heart. And as I write the story of our trip, I’ve realized an important truth: the best-told story is the story you live. As I traveled with a ministry team the first day, I went as an observer. I’d planned to watch the students serve food to the community, perform their pantomime drama, and share the Gospel. As I watched, I waited, notebook in hand.

Almost immediately, God took me from observer to active participant. I met a beautiful young mother whose baby girl arrived days before a volcano exploded above the already-impoverished village. Next, overfilled skies brought torrents of rain and a mudslide that destroyed the tin shack they called home. Maria’s story brought tears to my eyes and a prayer to my lips. As the two of us spoke, God drew me into her story.

That afternoon, I waited with a group of students as they prepared to perform their first drama. They stood, joking and nervous, while some made last-minute costume or makeup adjustments. My eyes fell on thirteen-year-old Sammy. As the Evil Magician (Satan figure), his was a pivotal role.

How could we help this young warrior prepare for battle? Once again, God called me to become part of the story. The students gathered, and I prayed—for Sammy, for his team, and for those who would hear the message. Later, as I watched him carry out his role with obvious authority, I praised God for giving me a role of my own.

My assignment in Guatemala was to capture the story. But I’m so grateful God allowed me to go beyond observation to life—real life and real ministry—in the orphanage, at the cancer hospital, in the Mayan marketplace, and more.

The best-told story is the story you live. What story has God given you to share?