WRITE: Frequently Made Errors #5: Reduce Your Use of Passive Voice 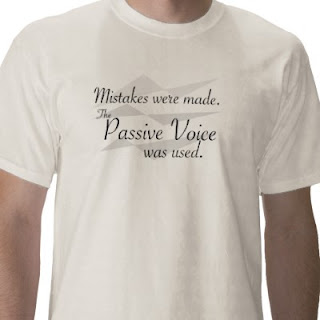 The question came again this weekend: “But how do I get rid of it?” As a part of our Word Weavers writing critique group, I critiqued a manuscript and encouraged its writer to reduce her use of passive voice. Overuse of passive voice, in fact, is one of the FMEs (Frequently Made Errors) I discussed in an earlier WRITE post. But as a friend pointed out, I failed to finish my blog discussion of that topic. Please forgive me! Here, at last, I present the follow-up to my original (5/18/10) explanation.
REVIEW: Overuse of the passive voice can weaken your writing. However, some things are or need to be.  Good writers don’t avoid all passives. But they can curtail them if they watch for overuse of forms of the verb “to be”: am, is, are, was, were, be, being, been. Those forms mark the passive voice. Print one page of your manuscript and circle or highlight all the forms of to be you find there. Or use the “Find and Replace” feature in Microsoft Word. Choose one form of to be like is or was to replace with a nonsense noun like hippopotamus. You may end up with sentences like this (replacing was with hippopotamus):
The eager salesman hippopotamus standing on the porch. While he hippopotamus waiting for someone to answer the bell, he hippopotamus twirling his mustache. An old woman hippopatums shuffling to the door. She rasped out, “What do you want?” and the salesman hippopotamus shocked. He hippopotamus unable to answer. No one hippopotamus ever brave enough to ask him that question.
The bolded words should help make you aware of  the passive constructions. Now rewrite your piece in a more active way. My example:
The eager salesman stood on the porch twirling his mustache as he waited for someone to answer the bell. An old woman shuffled to the door and rasped out, “What do you want?” Shocked, the salesman couldn’t answer. No one had ever dared ask him that question.
Did you notice that some of the other words and phrases changed when I removed the passive constructions? The corrected version also uses fewer words. Overuse of the passive voice can make your writing tedious. Good writing is easy to read.
I have a few more things to say about how (and why) to change passive constructions to active. But I’ll save those for another WRITE post. After all, I don’t want to be boring or confusing bore or confuse you.
Do you have a problem with passives—or a way to help eliminate them? Please share!