Posted by Marti on June 11, 2010 in 90 Minutes in Heaven, Cecil Murphey, Gifted Hands, Words of Comfort for Times of Loss, WRITE | 8 comments 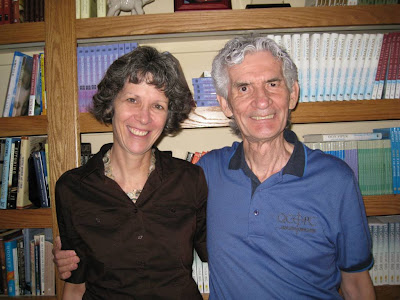 Little decisions can make a big difference. In 2007, as I pressed through the challenges of ghostwriting a memoir, I whined to an editor friend that I needed a “Ghostwriters’ Support Group.”

“You should get in touch with Cec Murphey,” she responded. After she provided his contact information, I made a small decision and reached out to the man whose name is synonymous with ghostwriting. I sent an email and received a polite, personal response. I also subscribed to his newsletter so I could learn more about the man and his message.

Cec Murphey, as he once told me, is “used to being ignored.” God—and Cec’s tremendous talent—is changing that with the success of projects that include the best-selling 90 Minutes in Heaven, written for Don Piper, and Gifted Hands, written for Ben Carson. This week, I read and enjoyed Words of Comfort for Times of Loss by Cec Murphey and Liz Allison. And Cec takes particular pride in his most recent release, When a Man You Love Was Abused.

Today, Cec Murphey writes many books that bear his name as author, but as a ghost- and collaborative writer, he does what I do. To be more accurate, I do what Cec does—on a smaller, less-experienced scale.

My little decision led to a bigger one when in 2008, I had the opportunity to attend a One-Day Intensive Writers Workshop in Cec’s Atlanta-area home. Because of the rapid way God moved me from writing magazine articles to books, I hadn’t spent much time around other writers. Until that weekend, I’d never attended a writers’ conference or workshop. I went—and fell in love.

I fell in love first with the writing community. I’d never known others who cared as much about words and the way they are put together as I did. Here—at last—I found people who spoke my language. As Cec shared his wisdom with the five of us, I realized: I know what he means. I understand why he’s saying this. It all makes sense. That weekend, I began a connection with other writers that’s an integral part of my present-day life and ministry.

I also fell in love with the man I’m blessed today to honor today. I watched the gentle, direct way he interacted with our small group. I heard his passion for God as he spoke of his dual commitment to keep learning about the craft of writing and to do as much as he could to help other writers. And I felt a strong sense of empowerment as—after multiple revisions—he praised not only my writing but my willingness to improve.

I attended the workshop to learn more about the craft of writing. I came away with much more. I now had a spiritual and writing mentor in this man who willingly, consistently lays down his life in service of others; who doesn’t hesitate to speak the truth in love; who gives without thought of return; and who writes each book with a consistent commitment to excellence. I’m thankful for my little decision and for the big difference it made—in my writing and in me.

(Forgot to add here that Kathy Perrine’s name was chosen as the winner of Cynthia Ruchti’s new book, THEY ALMOST ALWAYS COME HOME. Kathy, I’ll be in touch!)