PRAY: Waiting on His Answer 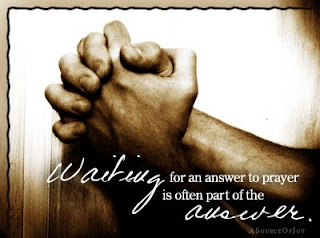 Most of us don’t like to wait. We live in a day of instant everything. If we can’t have it right away, we figure out how to have it virtually. Can’t spend an evening with friends? Enter Skype or FaceTime. Can’t make the high school reunion? Create a Facebook group and catch up the new-fashioned way.

Growing up near Cincinnati, Ohio, I watched as my next-door neighbors waited on the answer to a passel of prayers. Jim and Sharon Eyrich had adopted their son, Jamie, as a newborn.  Sharon was tall, glamorous, and (best of all in my pre-teen eyes) the owner of a beautiful quarter horse, Hickory.
When the Eyrichs adopted Jamie, I fell in love. I spent hours with Sharon and the baby I deemed “the cutest in the world.” Before long, I had the privilege of watching him while she did house- or yard-work. Soon, I graduated to true babysitting.
But something was wrong, and Jamie’s mother knew it. Sometime after his first birthday, her son was diagnosed with congenital hearing loss. I remember Sharon repeating the doctor’s words: the little boy was so smart he fooled everyone except his mother into believing he could hear.
Jamie’s diagnosis initiated a long season of prayer. Sharon didn’t know it, but as she waited on God to heal her son, she showed me the power of true faith.
But Jim and Sharon did more than wait. They pursued any treatment they thought would help their little boy. By the time he was three, they made a big decision: Jim would change jobs so the family could move to St. Louis and a school that would best meet their son’s needs.
By this time, Jamie and I were so close that he cried whenever I left to go home. And I still looked up to Sharon, whose faith moved me to examine my own.
Jim moved first. Before Sharon and Jamie could follow, she had to transport Hickory, and asked me to go along. I loved every moment, from dining at Steak ‘n Shake for the first time ever, to caring for a very active Jamie, to helping settle Hickory into his new digs.
You can guess the next part of the story. Sharon and Jamie joined Jim in St. Louis. Years passed. I went to college. Married. Moved. And lost touch.
For a while, my parents received the Eyrichs’ Christmas cards. I knew they adopted another baby—this time, a little girl. But before long, I had no contact. I prayed for my special friend on his birthday each year and wondered what kind of man he became. I wondered about those prayers for healing, too.
One day, his name came up on a Facebook search. I could see enough to know this was “my” Jamie. But what I couldn’t see was that those long-ago prayers were answered. For the past twenty-plus years, Jamie has worked at McDonald’s (twenty years at one location and, since August, in a new store). He helps his mother care for the horses who took Hickory’s place and is active in his local church.
But the most important thing about Jamie? His faith. Here, his pastor describes his tender heart much better than I could. But what I see on Facebook is a man who loves God and people. A man who blesses his customers with “Mc.Smiles” and more. A man who posts prayers that both humble and bless me.
The transparent faith I see in my grown-up friend’s life lets me know something else, too: God may not have healed Jamie’s hearing. But he has an ear—and a heart—for the things of God the way few hearing people do. In every way that counts, God has healed Jamie. His parents don’t need to wait anymore.
Not long ago, Jamie posted on Facebook that he’s “happy I’m in Both Worlds—one is Hearing World and Second is DEAF World!!!”
Jamie, I believe God has you in two worlds because you make a difference in both. I’m thankful you’re there (and back in mine, too). I pray you have many more years of giving Mc.Smiles to customers and kneeling beside your bed to pray for the people you love. Today, I’m thanking God for you and your parents, who waited on the Lord—and received just the right answer in you.
Do you have prayers that end in a “wait”? How have you seen God work through a time of waiting? Feel free to share your response.