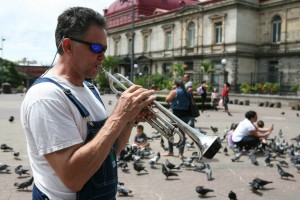 The maxim “opposites attract” is almost too obvious in the almost-thirty-one-year marriage between my husband and me. He’s loud and boisterous. I’m quiet and (so they tell me) gentle. He loves action movies. I prefer old-fashioned musicals and romances. A military brat, he tells people he’s from “everywhere,” but none of his family’s many homes were above the Mason-Dixon line.  Until I moved to Texas during our engagement, I had never lived anywhere but southwestern or central Ohio. He loves coffee. I never touch the stuff. I love to garden. He stays as far away from anything related to flowers and plants as he can.

But despite our many differences, we believe we have the most important things in common: a love for God. A commitment to relationships. A passion for missions and ministry. And of course, the five incredible young adult (our youngest two begin college this fall) children with whom God entrusted us. 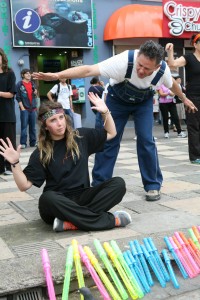 The Toymaker Rejoicing in His Creation

We also share a love for the arts. Tom is wired for music in the same way I am for words. Our children know that when we watch a movie, we never leave/turn it off until their dad sees all the music credits.  Most of the time, he and I understand and respect our individual needs to study, practice, and express our artistic passions. So when he told me the day before we left on our mission trip that he didn’t plan to bring his trumpet along, I was more than concerned.

I knew he had expressed some frustration with his practice since returning from a music mission trip to New York a few weeks earlier. What I didn’t know was that his practices had gone so poorly and his lip was so unresponsive that he thought he might have to give up playing forever. My former TRUTH member, nearly 50 years of trumpet-playing, professional musician husband not play his horn anymore? Unthinkable.

“I just don’t think I’ll be able to do anything.”

We talked a little more as I ever-so-gently reminded him that God had used his music on every international trip he’s taken. I couldn’t  imagine him leaving his horn behind, but I also knew the decision belonged to him. I prayed.

In a few more minutes, I heard him practicing.  I kept on praying. And the next day, Tom’s trumpet went with us to training. Soon, I asked our prayer team (totaling more than 100) to pray. Somehow, my still-a-music-man made time to practice even on our busiest days.

Writers write. Musicians practice. And Tom is the consummate musician.

During our time here, he has played for two of our FUAGNEM (Fired Up And Going Nuts Every Minute) worship services. He’s interacted with several other musicians. And all but the first day, he’s taken his trumpet out to the ministry sites. 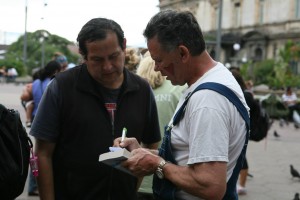 One of the fundraisers we held this winter for Tom’s mission trips was a concert at Asbury United Methodist Church, where he serves as Minister of Music. Here, he played excerpts of pop songs through the decades of his trumpet playing along with some sacred favorites. Our church family and friends who attended gave a generous offering that brought in more than $2000 toward his trips. And still on his iPod are the excerpted accompaniments for those pop songs.

This week, if you were to visit some of the poorer areas of San Jose, Costa Rica, you might hear a trumpet sounding forth with “The Little Spanish Flea” (Herb Alpert) or “Feels So Good” (Chuck Mangione). And if you got a little closer, you might see a crowd forming—a crowd that stays for a drama presentation, stories, and explanations of the greatest story of all.

I’m so glad opposites attract. I’m so blessed that Tom decided to accompany me on this mission trip. And I’m so grateful he brought his trumpet along.

Have you seen opposites attract? Are you someone who connects with Tom’s passion for music? Feel free to leave a comment or prayer request below. I’ll make sure my husband sees your words, too.