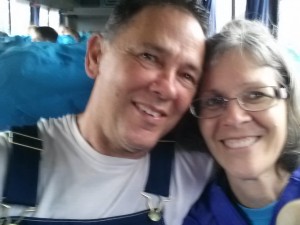 Publication deadlines and a busy travel/teaching schedule have kept me off the blog grid for several weeks, but I’m excited to write you tonight from San Jose, Costa Rica and the Never the Same missions trip. I’m traveling with this group for the fifth year as the writer for Sisterhood Magazine, which means I have the privilege of writing the story of the trip. I take great delight in encouraging the students to watch for the story God is writing through them, then come and share it with me. Because I do need to save some special stories for the magazine, this blog will contain more personal than student stories.

And as I have  learned on previous mission trips, the best stories come when I not only listen but allow God to make me a part of them. Today, God gave both my husband and me that privilege. Our trip coordinator, Steve Goley, suggested I travel with Tom’s team today because our traveling medical clinic was scheduled to work alongside them. We began our first official ministry day about twenty minutes from our hotel in a poor area of the city. Traveling that twenty minutes took about twice that long because of stop-and-go traffic. Through the windows of our bus, we watched the landscape change from more affluent homes and businesses to narrow streets, broken pavement, and concrete block homes with corrugated tin roofs.

The team performed two dramas today at two different sites in this neighborhood. At the first, the narrow street was barely adequate for the movement needed. At the second, the noise of nearby construction work threatened to drown out the narration and testimonies. But none of these concerns or even the rain that fell steadily during the second drama prevented God from moving.

After each performance, Tom had the privilege of sharing the good news of Christ with the crowd, and several each time indicated they had chosen to follow Him. When the students walked out to speak with the people, I went out to collect stories. And at least a few times, Tom and I had the privilege of ministering together.

He and I spoke with (among others):

? Ana, a woman in a wheelchair who told us she was ninety-four years old. Already a follower of Christ, she said God had led her to the drama site and that her faith sustained her. She asked prayer for her health. We were blessed to share a Bible with her, one of the 1,000 the teams bought and send ahead to Costa Rica. She beamed as she clutched it to her chest.

? Raphael, an amputee who was also in a wheelchair and showed us the scars from several surgeries on his one remaining foot. Also a believer in Christ, he seemed pleased that we had come to share with his neighborhood. He received our prayers with the same joy we felt in sharing with this brother in the faith.

? Felipe, a local pastor who hosted the day’s ministry. In talking with him, we learned that he and his wife make what they called “local food” to sell in the marketplace. Every Saturday, they use their earnings to feed fifty-plus children of their community. They make their home at one end of their small church building, partitioned by hanging sheets and curtains. Our students shared in the feeding ministry today, serving close to 200 meals.

This is only a portion of our day of and a few of the people with whom we spoke. We hope you can see evidence of the answers to your prayers here. But we also hope that when you think of mission service, you will remember that it is people like the ones we met today who make any small sacrifice on our part worthwhile. We may give a short portion of our summer or a small amount of funds, but people like Felipe and his wife give their lives and their hearts in daily service. We have no reason to applaud ourselves. All we do tonight is to thank the one Lord and Father of all for His goodness in allowing us to serve together and to serve these precious people at this time and in this way. Thanks for sharing in His work.

Please let us know how we can pray for you as well. Thank you for sharing in love and in prayer.