I Bet You Just Laugh All the Time: Tom’s Surprise Party 2016 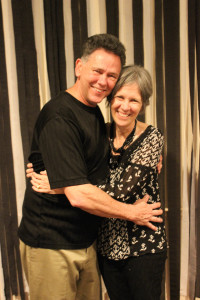 One of the things that’s kept me busy over the past few months has been planning what would hoped would be a wonderful SURPRISE sixtieth birthday party for my husband, Tom. As a part of the party, we asked friends and family to submit stories and memories about him to a special website my son-in-love created. We shared these stories, along with lots of pictures, as a slide presentation at the party and will also turn them into a scrapbook for him.

And of course, I had submit something, too. So indulge me in, once again, sharing some up-close-and-personal thoughts. And continued Happy Birthday to my husband–whose real birthday isn’t until March 23.

“I bet you just laugh all the time.”

This line has become a byword between my husband and me because people tell me that so often. After all, when they meet someone as warm, outgoing, and funny as he is, they assume we must have lots of fun at our house.

And we do. But, like most families, we’ve also had our share of hard times. The people who tell me I must laugh all the time may not realize that the funny guy they know is also the guy who rocked our son Samuel (born at 21 weeks) to sleep in the arms of Jesus. The guy whose humor has been misinterpreted in sometimes-painful ways. The guy who moved his family across the country for a position that went away. The guy who wondered if he would ever use his creative energies to do more than sell cars. 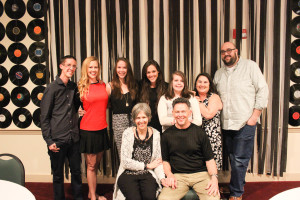 But Tom is also the guy who saw God move heaven and earth to give us our first daughter by adoption and five other children (including the one in heaven) by birth. The guy who started what has become the Pieper missions tradition by taking the first-ever mission team from our New Mexico church to serve at the New Mexico Baptist Children’s Home. The guy who kept turtles in his college dorm room (and in every home/yard where we’ve lived since). The guy who has traveled across the country and around the world to preach and play his horn. The guy who cared for two preschool daughters for two months (while still pastoring and preparing two sermons per week) while I was living 150 miles away. The guy who is walking out a calling to do so much more than direct a choir.

The guy who’s made mistakes and suffered consequences. The guy who’s experienced grace and freely extends it to others. The guy who was and is there for our kids and me in so many ways. And the guy who loves me more than anyone else.

As Tom loves to tell people, when we met back at Ohio State, I didn’t like him much. But when I received my first real letter from him (the one not written on a balloon), I realized he was someone special. Someone who loved God. Someone who cared more about my relationship with Jesus than anyone I had dated in the past. Someone I needed as a friend—and later, so much more.

Babe, I am so blessed to have walked these past almost thirty-three years with you. You are my sweetheart, my confidant, my encourager, and still my best, best friend. Your love has given me the freedom to become the woman God wanted me to be all along. Your faith has laid the foundation for the family of young adults who challenge, inspire, and go far beyond their parents in almost every area of their lives.

I’m grateful for the privilege of belonging to you. “I will be here” for you in the days ahead because He is faithful. Because I love you. And because two are always better than one.

Especially when it comes to laughing all the time.

Happiest of birthdays and best of love always from–